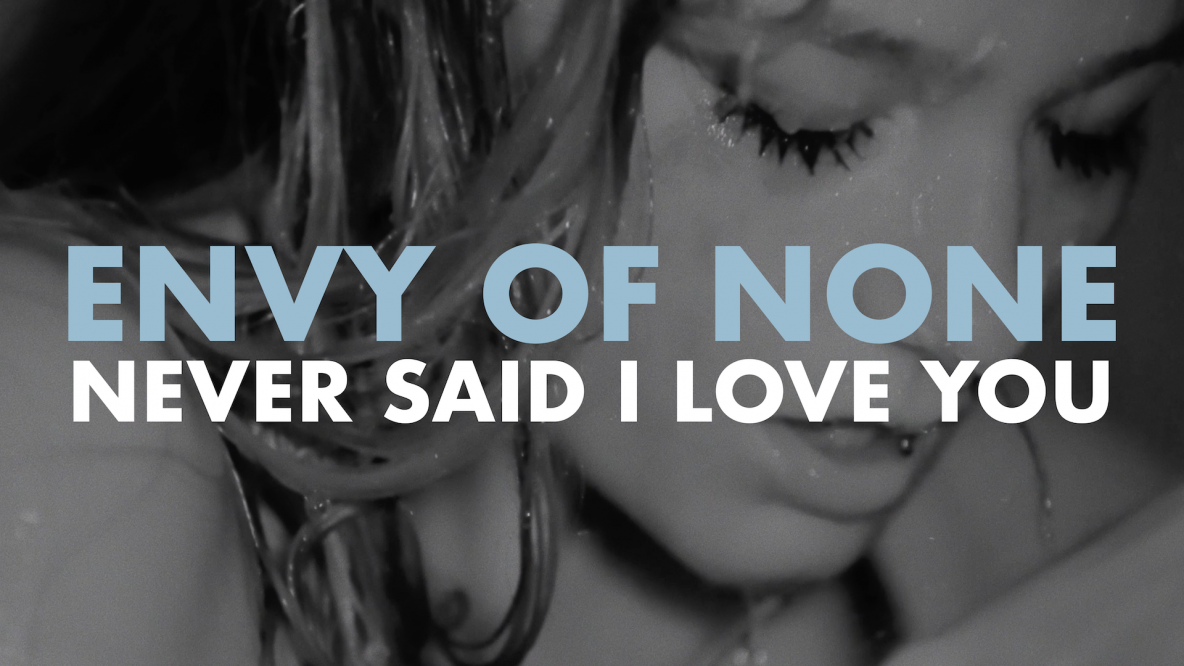 Following the release of their debut self titled album, which charted worldwide and garnered praise from both fans and media,  Envy Of None, the new project featuring Alex Lifeson (Rush), Andy Curran (Coney Hatch), Alfio Annibalini and singer Maiah Wynne have released the video to their latest single “Never Said I Love You”.

The video, a Blacktide Phonic/Visual Production, Andy Curran describes as having “really captured the spirit of the song. It’s very cinematic and I love all the moody cityscapes. The main character is very free spirited, and the video loosely follows the narrative in a subtle way. I love the picking of the flower petals: ’He loves me, he loves me not? Isn’t that what life's all about …wanting to be loved or accepted?”

On the song Andy continues “’Never Said I Love You’ is a very special one for me and Alf. It had been kicking around for a while in a demo form and the bed track always felt like it had so much potential. When we wrote the backing tracks we were certainly feeling it had some punk/pop overtones, I think we were channelling late 80’s Brit pop vibrations and I came up with the lyric line “I Never Said I Love You” again inspired by bands like The Cure, Depeche Mode, The Smiths & Ultravox who all wrote about broken hearts on the dance floors around the world  ..so I thought it was time to re-introduce that theme but with something that was more upbeat. When Maiah and I spoke about this she liked that lyrical hook and ran with it. The icing was Alex coming in & in the 11th hour adding the awesome middle section that sounds like pedal steel and the acoustic guitars in the chorus just elevate it to the next level. My initial thought lyrically was more of a -back off, I never said I love you. Kinda like, hey were just friends but I love how Maiah turned that into something much different.”

Maiah Wynne adds “This song had great energy from the beginning. Everyone connects and interprets music from their own unique perspective. When I heard the line "I Never Said I Love You" I thought of it more from the point of view of someone who never had the chance to tell the person they love how they felt before it was too late. Maybe a bad fight in a relationship that never had a resolution, or a casual fling that never became a serious relationship despite deeper feelings being there, or friends with romantic feelings that never became lovers. When I wrote and arranged the rest of the lyrics and vocal melodies for the song I wrote it with that sense of connection, tension, loss, and longing in mind.

“We've been working on and off with all these songs for over 4 years so it’s extremely rewarding to finally finish them all and share them with the world. It’s like all these baby birds (our songs) leaving the nest and flying out into the sky …we have no idea where they will go or who else they will meet along the way - it’s exciting. People have been very kind and supportive online and maybe the most rewarding part is hearing die hard Rush fans say they love it. I wasn’t expecting that, same with fans of Coney and my other projects. This is nothing like what me, Alex or Maiah have ever done, so having people comment on social media in such a positive way has really been so cool to see. I’m very proud that we found a home for these songs and have to thank our label Kscope for believing in these songs and stepping up to roll the dice and release it. So fun to be part of this ride.” Andy Curran

Order Envy of None Now
Sign up to the Kscope newsletter for the latest news and releases from the label!
Holler Box