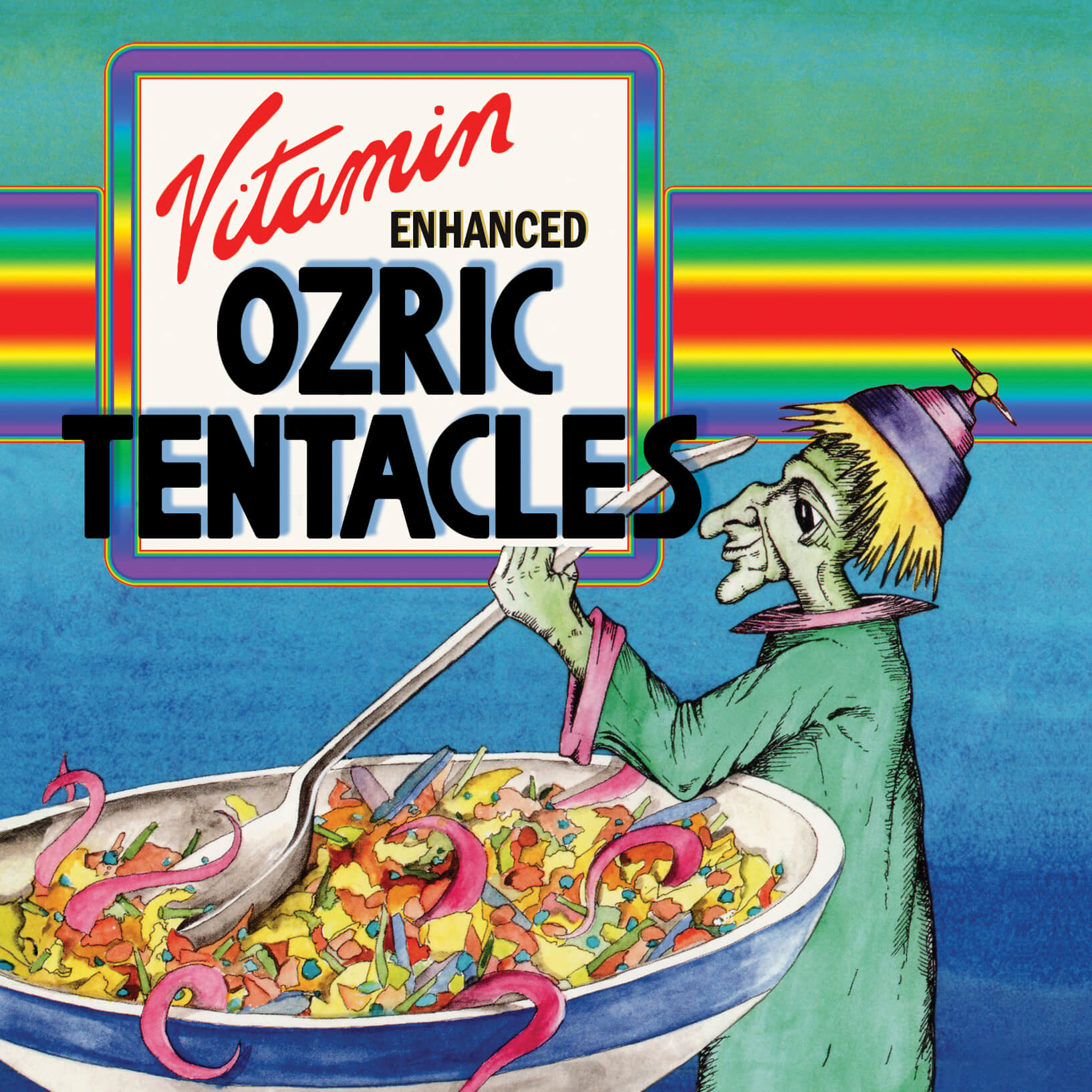 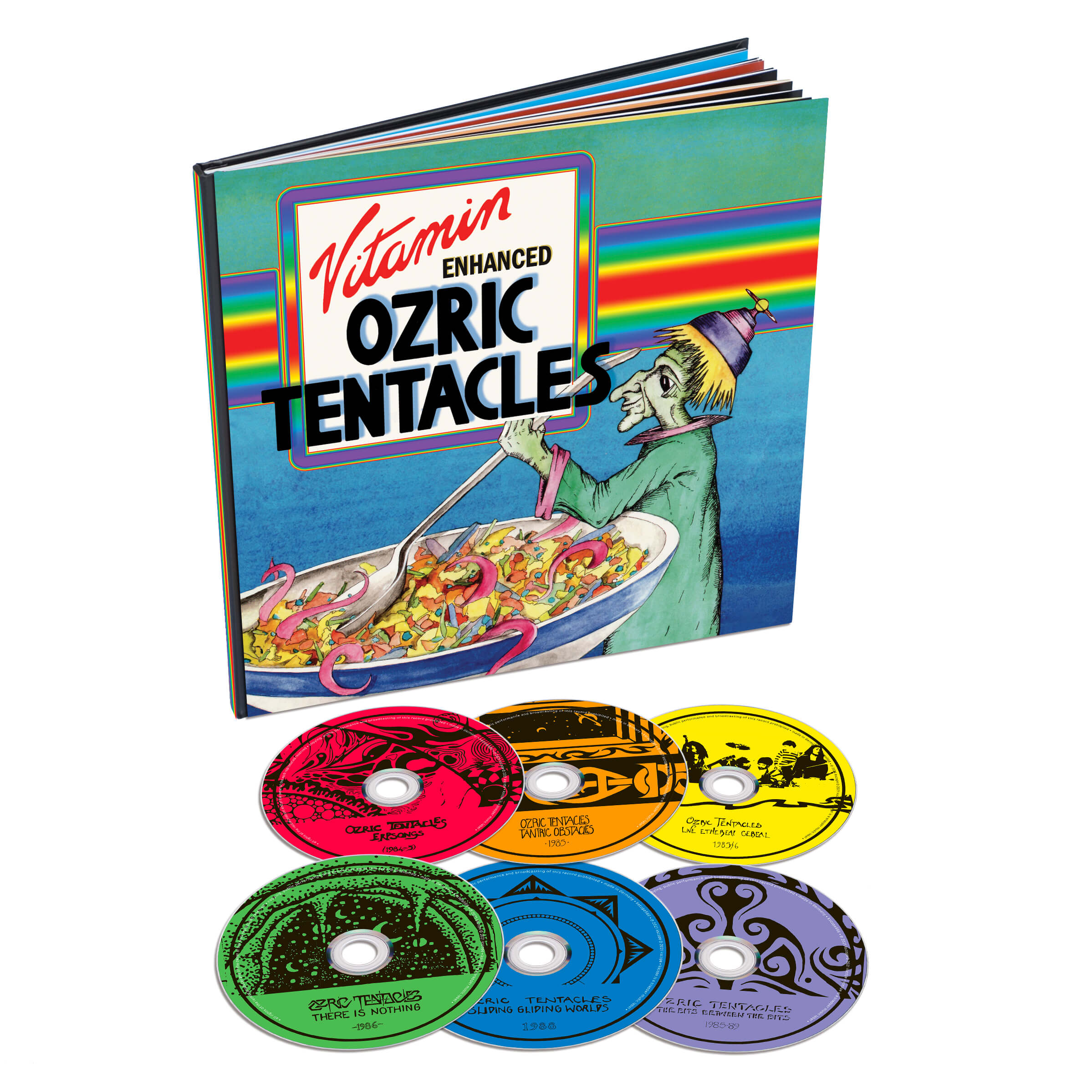 Pioneering British band Ozric Tentacles have announced a special reissue of their classic cassette album collection ‘Vitamin Enhanced’ will be released on 9th April via Kscope. A six CD edition complete with a carefully curated book, each album has been lovingly remastered by the Ozrics long-time leader, Ed Wynne at his Blue Bubble studios in Scotland, the first time in their long history he has been able to personally mix and master the tracks. A mainstay of the UK festival scene since the early 80’s, Ozric Tentacles weave psychedelic audio-tapestries that captured the far reaching musical diversity of the free festival scene, blending acid rock with dub, reggae, ethnic world music and electronic, jazzy experimentation. This was the soundtrack to the herb fragranced, alternative lifestyle that wound its way around country lanes looking for a place to set up and party, away from the psychoses of corporate life.

A raggle-taggle, unpretentious assortment of punk-infused, dreadlocked hippies, the band was formed at the Stonehenge Festival in 1983. Ed and Roly Wynne, Nick Van Gelder (Tig) and Gavin Griffiths (at that point known as the Bolshem People) were joined for a jam by Joie ‘Ozroonuiculator’ Hinton - a synth wizard who had just returned from India loaded with ethnic sound recordings that he had collected.

At some point, having attracted an audience, someone asked what the name of the new ensemble was, and Ed responded ‘Ozric Tentacles’ mainly because he couldn’t think of anything else. The name stuck and a mainstay of the UK festival scene for the next 30 years was born. Without any desire or need for a record label, it was the Ozric Tentacles' cassette releases that funded and supported their journey through the ‘80s. These simple artefacts with photo copied inserts and rainbow, spray painted labels were sold in vast quantities at festivals, on the merchandise table at Club Dog and through a mail order outlet called Better Days Tape distribution.

So treasured were the bands six cassette albums that in ‘94, just after the Ozrics hit the big time, the albums were remastered and packaged together in a six CD box set called Vitamin Enhanced which was sold in a limited edition of 5000 copies on the band’s Dovetail Records label.

More than 30 years after that initial jam, the band are still going strong despite many line-up changes and the everchanging vagaries of the music industry and Vitamin Enhanced is to be reissued, bringing confusion to breakfast buyers once more. All six of the albums have been carefully remastered, ensuring that they have never sounded better.

“So…here we are and there you go. Once again, these six albums go out into the world, with new ears!
This latest fourth incarnation of what became known as the 'Vitamin Enhanced Box Set' is the first time I’ve personally had a chance to really make th e frequencies and spaces shine bright enough on these tunes to satisfy my ears. I hope you have as much fun listening as I did enhancing!! Be well and shine bright!'' Ed Wynne, Ozric Tentacles.

Ozric Tentacles Electronic are regarded as one of the most influential bands to emerge from the UK’s festival scene, Ozric Tentacles formed during the solstice at Stonehenge Free Festival 1983 going on to become psychedelic staples at Glastonbury and other festivals.

Unfortunately, but not unsurprisingly, the Ozric Tentacles Electronic tour has been postponed yet again, and hopefully for the last time, to December 2021. It’s not at all what we wanted, but with the ongoing situation we have very little choice.

Hope you’re all doing ok out there despite all the uncertainty and everything … try and keep the spirits shining, chakras aligned, chins up, all that good stuff as best you can.

So, inevitably, once again we’ve had to re-schedule our live shows until later this year. It was kind of expected, and we hope not too disappointing. We were really looking forward to these gigs, but it seems we’ll have to wait a few more months now and looking at the new schedule it does look like a lovely tour indeed!

So looking forward to it. We really miss you guys!!! Meanwhile we’ll do our best to keep you all informed and entertained as best we can.

Can’t wait to see you out there… 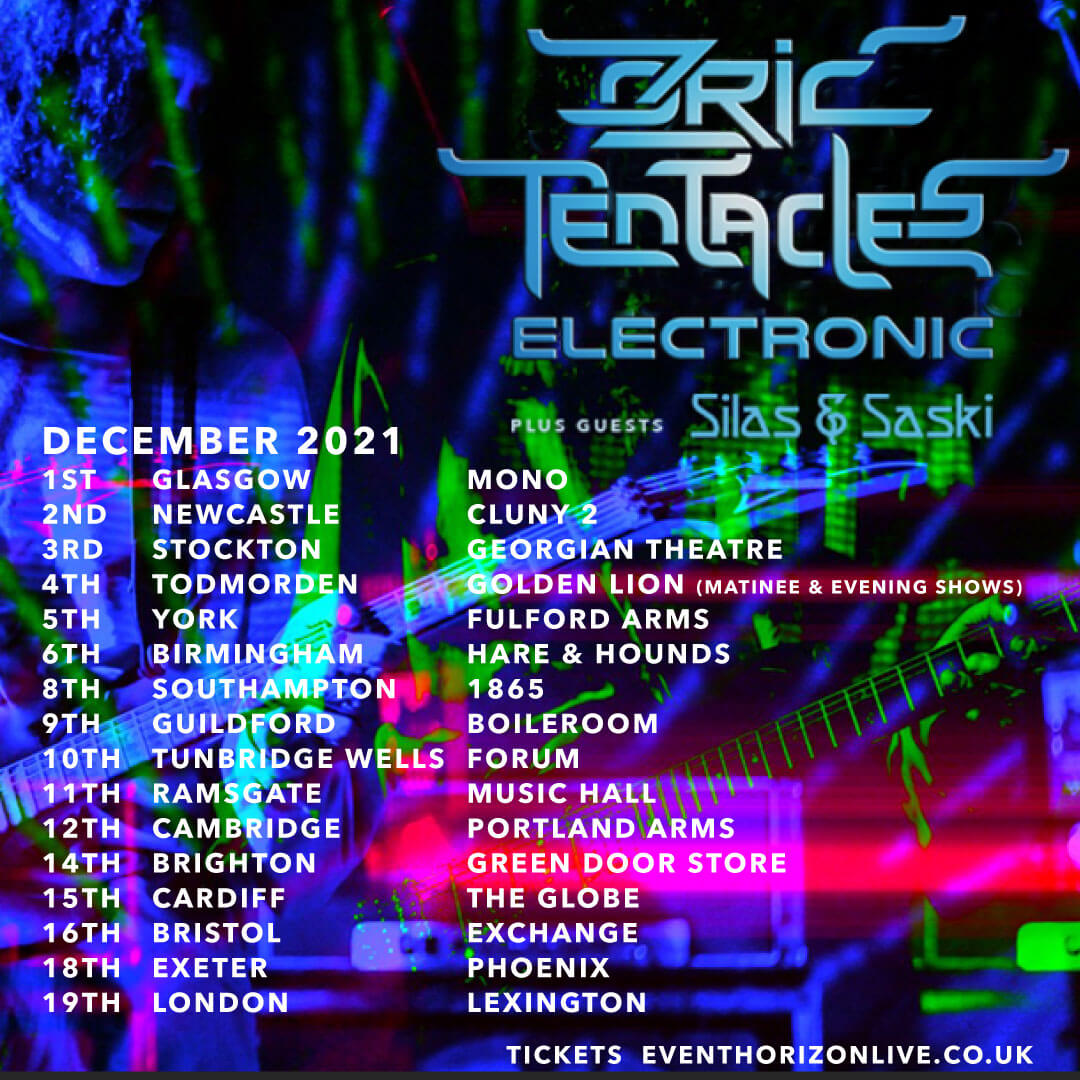 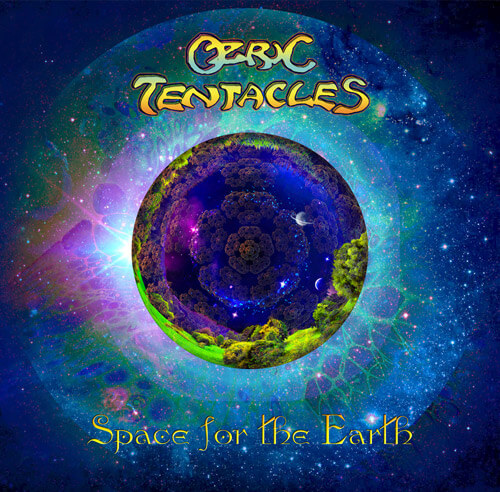 Order/save ‘Space for the Earth’

Space for the Earth

Space for the Earth, the latest Ozric Tentacles album is OUT NOW!

Written, programmed, recorded and produced throughout 2019/20 by Ed Wynne in ‘Blue Bubble Studios’ by the sea, this exploratory and diverse musical adventure comprises seven new tracks spanning 45 minutes.  Inspired by the Scottish hills, valleys and beaches surrounding his studio, Wynne feels that lockdown in a strange kind of way has provided space for the Earth to breathe for a while and for people to rediscover its resonant healing frequency.  ‘This is space music for people from the Earth to enjoy’.

The album artwork was inspired directly by these seven tracks and realised by arboreal artist Kitty (Twisty-Trees) with help from Ed and cosmic artist Ivy.

To celebrate this year’s summer solstice Ozric Tentacles released a new single, taken from Space For The Earth, entitled “Humboldt Currant”, the track Ed Wynne states “‘It’s a light-hearted message about feeling all right. It's not trying to dig down into the depths of what is going wrong in the world but giving people a little bit of relief from everyday life, a stepping-stone into the astral plane’.

One of the most influential bands to emerge from the UK’s festival scene, Ozric Tentacles formed during the solstice at Stonehenge Free Festival 1983 going on to become psychedelic staples at Glastonbury and other festivals.  The creative vision of multi-instrumentalist Ed Wynne, the Ozrics’ uniquely trippy soundscapes connect fans of progressive rock, psychedelia and dance music culture.  Space for the Earth represents the next harmonic step in the unfolding Ozric journey.

Space For The Earth will be released on CD, LP (black and coloured vinyl available) and digitally and is  Out Now 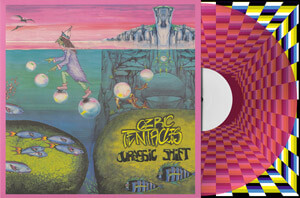 Jurassic Shift was the fourth proper release from the band and the first album to be recorded in their own studio The Mill. The album reached #11 in the UK national chart when it was released in 1993. This version of Jurassic Shift will be released on pink heavyweight vinyl as the fourth title in the Ed Wynne remasters series on Kscope. 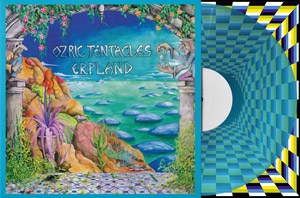 Erpland, the band’s 1990 eighth release, is considered one of their finest works. This 2LP set presented in wide spine packaging, will be released on turquoise heavyweight vinyl as the third title in the Ed Wynne remasters series on Kscope. 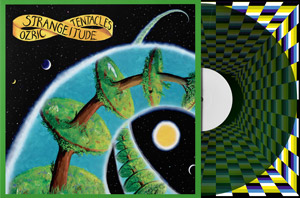 Strangeitude was released in 1991 and featured the band’s first single, Sploosh! which reached number 1 in the UK independent chart. This LP edition is pressed on green coloured heavyweight (180g) vinyl. 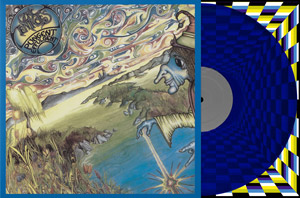 Pungent Effulgent is available on heavyweight audiophile vinyl. The band's early influences from peers such as Hawkwind, Gong and Pink Floyd are evident in this transformative release. 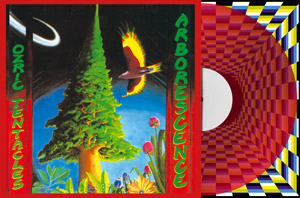 It’s an open exploration of music and the soul. The band's last release to feature Merv Pepler and Joie Hinton, who left to form Eat Static, Arborescence was the Ozrics' fifth studio effort in as many years. Soundscape textures remained their focus and their strength, with the now trademark Steve Hillage-esque guitar, gurgling and whirling synths and tight rhythm section all wrapped around rave, techno, African and Middle Eastern influences.

Classic Ozrics then. Arborescence will be released on 180g red vinyl as the fourth title in the Ed Wynne remasters series on Kscope. 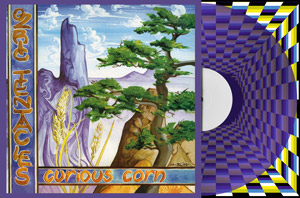 Curious Corn is a classic Ozrics album, blending rock, ambience, world music and expert bass lines with a trademark groove that will remind fans of the band's remarkable festival performances.

Including fan favourites “Oddentity” & “Spyroid”, Curious Corn will be released on purple heavyweight vinyl as the fifth title in the new Ed Wynne remasters series on Kscope. 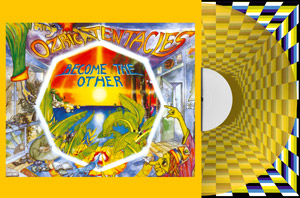 The band's first release after Merv Pepler and Joie Hinton left to form Eat Static, Become The Other still possesses the cool, psychedelic spare rock of its predecessors. With hints of techno, psybient and world music, the album kicks off with some fine guitar and bass on 'Cat DNA', followed by the atmospherics of 'Ahu Belahu' and 'Ghedengi'. 'Wob Glass' is all synthy techno whilst 'Neurochasm' is a cool trippy rock track and so very Ozrics.

Become The Other, a 2LP set presented in wide spine packaging with a D side etching, will be released on yellow vinyl as the third title in the Ed Wynne remasters series on Kscope.